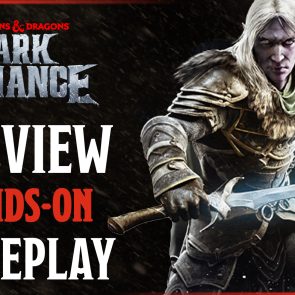 Recently I was given the opportunity to go hands-on with Dark Alliance, the new hack n’ slash action RPG slated to release this June, developed by Tuque Studios and published by Wizards of the Coast. I got to co-op my way through the first Mission of the game with Jeff Hattem, the head of development on Dark Alliance, gaining some real insight into what players can expect. So what does Dark Alliance play like? Read on to find out.

I have fond memories of Baldur’s Gate: Dark Alliance and Baldur’s Gate: Dark Alliance 2, games that mix elements of D&D and other ARPGs to create a blend that is very unique, yet familiar. The fact that few games have been made in a similar vein since their release has only increased my affection for these titles, and just thinking about them makes me want to dust off my discs and pull out my original Xbox. 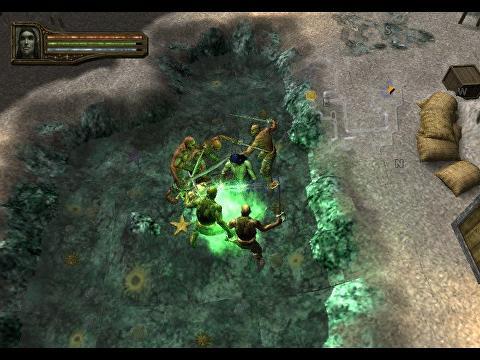 What made Baldur’s Gate: Dark Alliance so good was that you didn’t need to know anything about D&D in order to play, it still had a very D&Dish vibe to it in terms of setting and mechanics, it had tons of loot and character customization, and you could play couch co-op with a friend or loved one if you wanted.

And while Dark Alliance is the next installment in this franchise, though not a direct sequel, it doesn’t play anything like the original titles. Instead, Dark Alliance focuses on a multiplayer experience that reminds me a lot of Lord of the Rings: War in the North, with a loot system that is akin to the Destiny franchise. 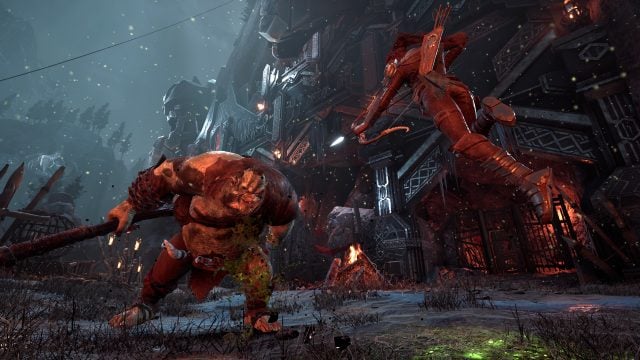 War in the North was certainly not a bad game by any means, but it is also not Baldur’s Gate: Dark Alliance, and I think fans of the original games are going to initially be disappointed when they realize this. However, I’m not sure how many people that will play this title have actually played the old Dark Alliance games, not only because they are nearly two decades old, but also because they are not playable on modern consoles nor PC.

When asked why the change in direction, Jeff replied that they wanted a larger focus on multiplayer and that they didn’t want to do something that was just a copy/paste of the older titles, because so much time had gone by since the original games were published. In other words, they wanted to make a product that fit the interests of modern gamers, and what a big portion of those want these days is multiplayer. 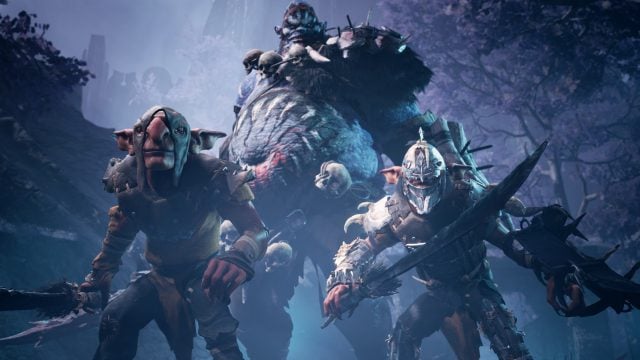 It’s hard to argue that point in some ways, especially since the older games had some fantastic multiplayer, but it is extremely disappointing that Dark Alliance will not feature local co-op, because this was a big part of what made Dark Alliance so much fun. There are very few local co-op RPGs, and it would have been fantastic to add another one to that very short list, particularly from a franchise that has produced some of the best in the business historically.

Dark Alliance in a Nutshell

The core gameplay loop of Dark Alliance is progressing through the game’s 21 Missions, following along with the story as you grow stronger and gain lots and lots of loot. Not much was divulged about the narrative, but from the brief time I spent playing, I get the sense that the story of Dark Alliance will take a backseat to the gameplay. Given the focus on multiplayer, I don’t expect this to be too big of an issue. 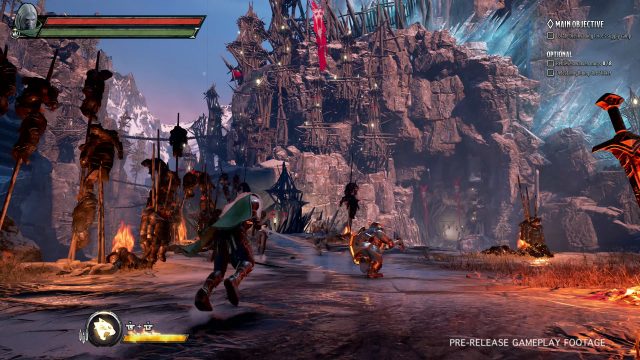 In between Missions you will identify and equip your loot, spend time customizing your character with Skills and Attribute points, as well as upgrading your equipment via materials you’ve obtained on Missions. The idea is that you will play each Mission again and again upon completing the campaign, getting stronger and stronger, in order to get through all 6 challenge ratings (difficulties) Dark Alliance has to offer.

There is no “End Game” per se, and once you have finished up all Missions on the hardest difficulty that’s essentially a wrap on Dark Alliance, though there are plans for frequent post launch content updates. No word yet on exactly what these will include, but I think you can expect more Missions, more difficulty levels, and probably more loot as well in an attempt to keep things fresh and interesting.

As I mentioned earlier, the gameplay of Dark Alliance reminds me of the very last game Snowblind Studios developed before merging with Monolith Productions – Lord of the Rings: War in the North. You will make your way through each Mission, fighting group after group of enemies while using your chosen character, playing from a third-person perspective. 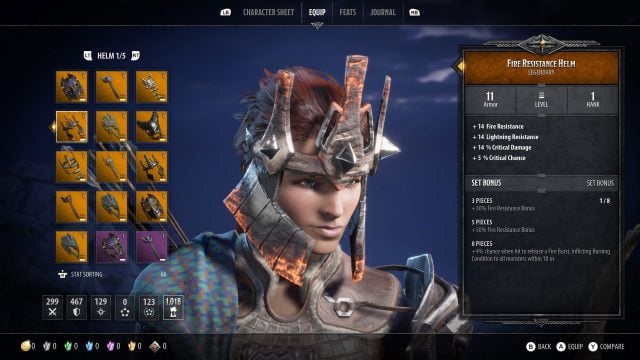 Dark Alliance features 4 different characters for you to choose from which are the following archetypes loosely: Rogue, Archer, Fighter and Tank. Each has their own strengths and weaknesses, and they will get stronger and unlock their own unique Moves throughout the course of the game that really define how they play.

Dark Alliance, much like the original games, has no character creation, and fans of the franchise will note there is no “mage” character. It’s hard to think about Dungeons and Dragons and not picture at least one spell casting Class, so I’m not sure what Wizards of the Coast was thinking here. 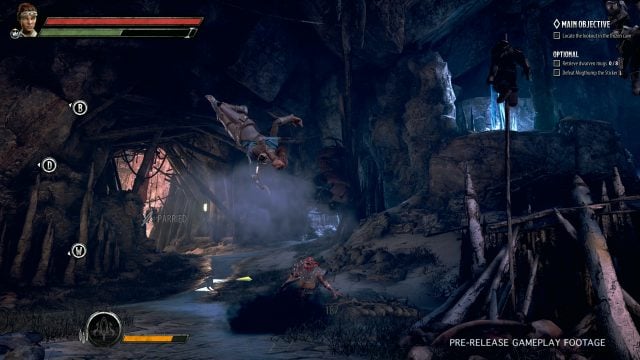 In Dark Alliance you will have to decide how to tackle each fight, and must manage your Stamina, Health and Rage. Stamina is used to attack, dodge, block and parry, and your Max Stamina even begins to reduce over time as you take damage and exhaust your character, making things more challenging in between checkpoints. 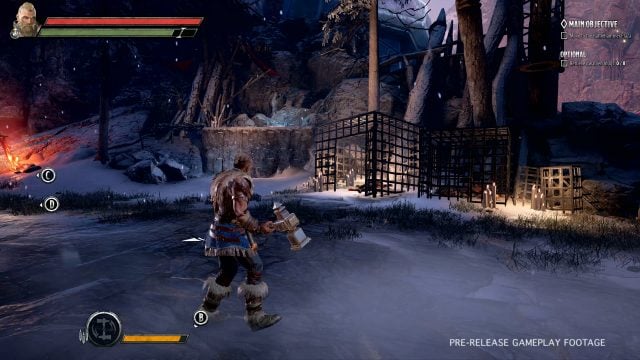 You build up rage as you attack enemies, allowing you to unleash a powerful attack or buff for a certain amount of time, and it’s usually best to save these for tougher groups of enemies when you can.

You will have potions you can consume in between each checkpoint that restore Health, Stamina and Rage, but you only have a very small amount of these. Your goal is to make it to the next checkpoint where you can replenish these if you need to, but great players will forgo these checkpoints, which increases their chances of better loot. The downside is that should your whole group be downed, then you will restart at the last checkpoint you did use, which might be way earlier in the level, creating a risk vs. reward system.

In Dark Alliance you will customize your character by spending Attribute Points, as well as spending Skill Points on your character’s Skill Tree. Each character has 4 Skill Trees, with one being completely dedicated to Moves that you can unlock for that character. The other 3 provide passive benefits, allowing you to accentuate the playstyle that you like the best. 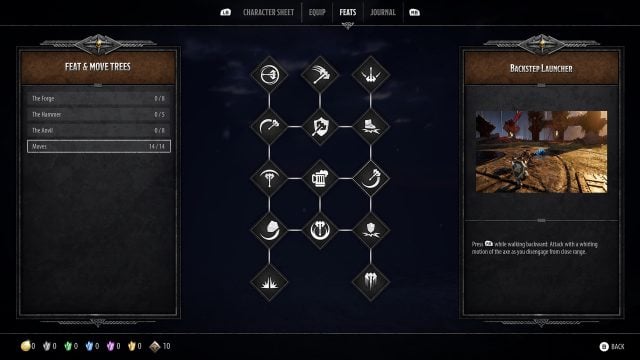 Beyond this you will pick up equipment that will directly increase your power through passive bonuses to Attributes, damage, resistances, etc. It’s worth noting that all Equipment in Dark Alliance is part of a Set, of which there are more than 30. These means you will essentially be trying to put together these Sets from the very beginning of the game.

Equipment also has Rarity, meaning that a Legendary version of the same Set item will have more bonuses than the Uncommon version. And besides having more bonuses, higher rarity equipment will also have its own visual appearance, making you look more and more badass as you collect better versions of the same Sets. 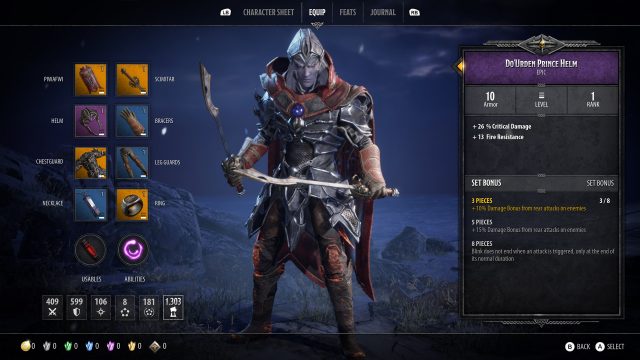 Adding more complexity to this, each piece of Equipment also has a Rank from 1 to 5. Items with higher Rank, as I understand it, have higher bonus values, making them better versions of lower Rank Equipment of the same name. So not only will you be trying to get a Legendary Helmet of Goblin Slaying, you’ll be trying to find a Rank 5 version of it as well.

Lastly, you will also be able to upgrade your Equipment using Materials you find on Missions. This further increases the bonuses of your gear, but can only be done a maximum of 3 times per piece of equipment, so you cannot increase these bonuses infinitely.

After getting over my initial disappointment that Dark Alliance is nothing like the original games, I tried to find the positives in this new iteration. The combat is fun, the multiplayer aspects will surely bring hours of enjoyment, and I love min/maxing and making Builds, which Dark Alliance appears to have a ton of. 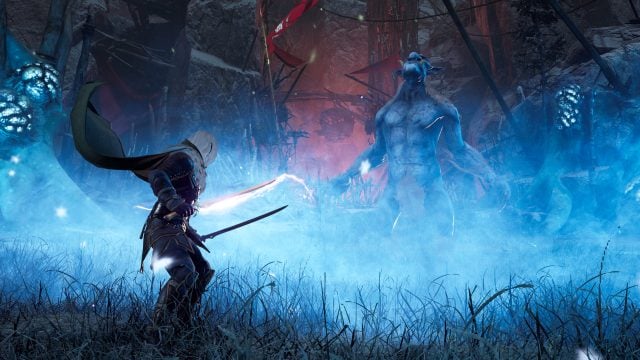 If games like Lord of the Rings: War in the North or Godfall are your cup of tea then you will certainly have something to look forward to this June in Dark Alliance. However, if you were expecting a D&D “light” experience, much like the original games, then you will likely pass on this title. There is almost no actual Dungeons and Dragons in Dark Alliance, save for a few notable characters and locations, and Dark Alliance was clearly not aimed at D&D fans, but rather a younger audience that has likely never played D&D before.

There are some silver linings though. Dark Alliance is only 39.99 USD, and there are no micro transactions of any kind. This means you will purchase the complete experience, and it won’t cost you the price of a triple A title. Additionally, as I mentioned, there are already plans to add new content after launch, much of which will be free for players. So if you like what you see then you can expect more to come.

Dark Alliance releases for PC via Steam and Epic, Xbox One, Xbox Series X/S, Playstation 4, and Playstation 5 on June 22nd of this year. We’re getting another hands-on play session with the game in a couple of weeks, so you can expect more updates on Dark Alliance as we get closer to release. And if you have specific questions about the game, be sure to check out the Dark Alliance Wiki!