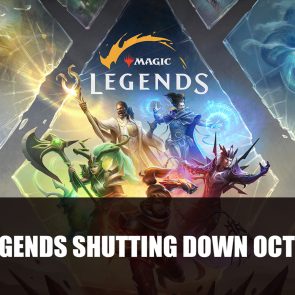 Developer Cryptic Studios behind the online RPG Magic: Legends based on the Magic The Gathering universe has announced the game will be shutting down on October 31st.

Magic Legends was first released into Early Access in March of this year, and was expected to fully launch later in 2021 for PC, Playstation 4 and Xbox One. However, developer Cryptic Studios have announced they will be shutting down servers on October 31st at 11:59 p.m. PST, and the title will not be fully launching.

Cryptic Studios have shared they have “no plans” to continue working on the game in future. According to the statement released on the official Magic Legends website by executive producer Stephen Ricossa, the game “missed the mark” in terms of vision.

Magic: Legends is shutting down on October 31, 2021. Read the full statement and FAQ here > https://t.co/BMQZDHTWrU pic.twitter.com/6viue1Sbs6

The statement also confirmed that those who have made purchases through Arc or the Epic Games Store will be refunded their full purchase amount. The Open Beta will remain open until servers shutdown, but the Zen Shop will be closing immediately. All items will still be purchasable but through the free in-game currency.

Magic Legends was released as a free-to-play RPG based on the Magic: The Gathering card system which provided spells for characters at random from a deck. The combat offered quick, fast-paced action with multiplayer, letting you build a deck of spells to use in battle. Recently the latest class to be added was the Pyromancer back in May, which featured the power to wield Red mana as a ranged caster.

Be sure to look out for our Magic Legends video as we discuss the news about the game shutting down over on our Youtube channel.